The Google™ map above represents about one thousand miles traveled over a twelve day period in late September but with only four days of actual distance travel between layover points. So we didn’t knock ourselves out with huge distances and long drives. The longest segment was between Moab, Utah and the Grand Canyon Village in Arizona and that was only about 328 miles (roughly 6 hours of travel). Of course we did a bit of driving at each of those layovers to sight-see.

We met our friends and travel buddies, Lew & Louise, at Denver International Airport, arriving only 30 minutes apart (not bad at all considering we were coming from opposite edges of the country). We piled into our rental SUV and headed west on I-70 into the Rocky Mountains (after a quick stop for lunch) toward our first destination – Breckenridge, Colorado – about 100 miles from DEN. Along the way we drove through the Eisenhower Tunnel which crosses the Continental Divide at nearly 11,200 feet. It has always given me a kick to realize how much more mountain is still above us as we pass through.

We enjoyed our stay and visited much of the surrounding countryside, predominately mountains, as well as the Victorian feel  of this 188 year old, initially gold mining, town. 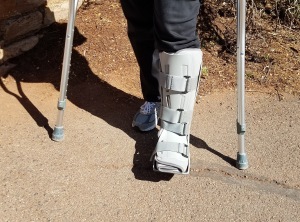 Unfortunately, during what must have been a dangerously rigorous window-shopping expedition, Billie fell down a badly marked set of stairs in one shop and sprained her ankle badly enough to require a stop at the Emergency Room for x-rays and the application of crutches and a boot (which she dealt with for the remainder of the trip and after our return home).

I did go out early one morning to look for some images of Breckenridge (before Billie’s accident) . I had done some scouting the day before and had some locations in mind. My favorite of the bunch captured that morning turned out to be one of the last I shot during our visit to this town. As you can see, it was taken after the sunrise had passed.

Here are a few others that were taken a bit earlier that same morning (hover over each of them to get a bit more information).

South Breckenridge at the start of the “Golden Hour”; the full sunrise is still 45 minutes away

Sunrise starts to light up the western ski run hills 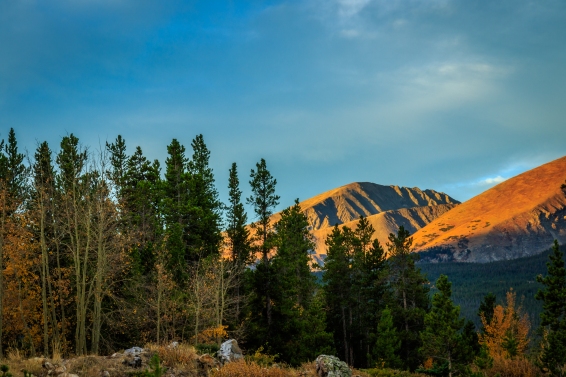 Sunrise lighting up mountain tops above the tree line 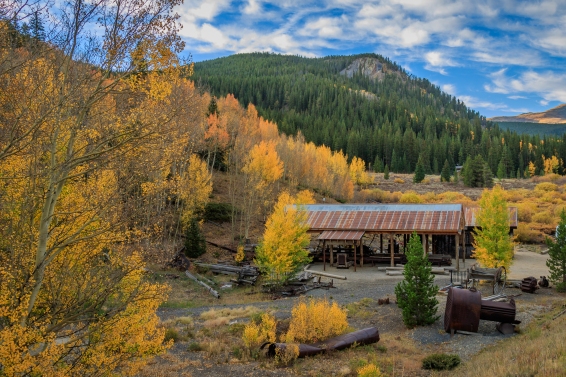 [Note: After this blog post was published I realized (hand-slap to the forehead) that the two very similar sawmill photos could be merged into a single, 2-frame panorama. If you visit my photo website, those two have been replaced by the new, combined image.]

Some believe that the name of the town is Biblical in origin referring to an area of land on the eastern side of the Jordan River. Others believe it has Paiute origins. Most importantly, it is unrelated to the acronym MOAB (referring to a powerful Massive Ordnance Air Blast bomb – sometimes more colloquially called the “Mother of all bombs”). Initially an agricultural town, it gradually morphed toward mining. Today it is a jumping off place for tourists interested in visiting Arches and Canyonlands National Parks, and other outdoor activities.

Our hotel was one located a couple of miles north of town, closer than most to the two national park entrances and also next to the Colorado River. I went out on our first morning to capture sunrise photos of the river. Here are two photos from my morning adventure.

We all spent the two days we were in town visiting Arches NP, Canyonlands NP, as well as Dead Horse State Park. Here is a brief slideshow of other photos from the area.

We departed Moab, driving south through town on US highway 191 and continued on that road until crossing into Arizona (and a time change to Mountain Standard Time – the same as Pacific Daylight Time at this time of year) where we turned more southwest on US highway 160. After a time, we turned south again on US highway 89, eventually coming to AZ highway 64 where we headed west to enter the east entrance of the park to reach our destination in Grand Canyon Village.

I went out early the next morning to try to catch some morning light over the canyon and captured what is now my favorite of my GC images. (I previously complained in a social media post about foolish and self-centered people taking chances with their lives while also inconsiderately climbing on the cliffs for dangerous ‘selfies’ to spoil other photographer’s carefully setup photos). I am happy to say that I have managed to successfully remove those photo-bombers from my image of first light into the canyon, shown here.

Here is another image captured just a few minutes later from the same location.

The four of us also took a drive east along Desert View Drive (aka AZ 64, the same road we used when we initially entered the park) this time for the purpose of visiting some of the other canyon overlooks we had ignored on our way to check-in to our hotel. As it turned out we were also met by some occasional showers that day. When they were not raining directly on us, they were still visible in the vistas of the canyon, making for some interesting and somewhat moody images. 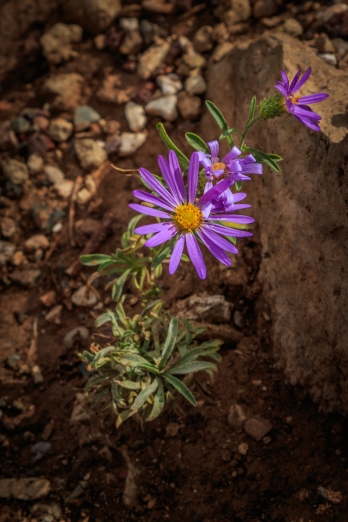 Our last drive of about four and a half hours brought us to the end of the road trip in Las Vegas. Our travel partners, Lew and Louise, were primarily interested in taking advantage of the features of the strip while Billie and I wanted to visit some of the areas surrounding the city. However, we were also fairly tired and quite willing to just enjoy the comforts of our room for some of the time; that also gave me time to start processing some of the many photos I had taken. We got together with our friends for breakfast and for some fabulous dinners but otherwise each followed our own interests.

Billie and I did manage to visit one interesting area just to the west of the city – Red Rock Canyon National Conservation Area. Because Billie was still wearing a boot and using crutches to get around, we restricted our visit to just the places we could reach by car (that’s my story and I’m sticking to it). I took some photos more to document that we did visit but look forward to revisiting this area (when it is not so hot) and doing a little hiking and additional photography.

As usual, you can also see many of the images in this blog post, shown larger and with more detail, by visiting my photography website at CedBennett.Photography. To go directly to the images just added, click here. Please feel free to comment or ask questions using the Comment section, below.